Clarkson Hammond and May Live. 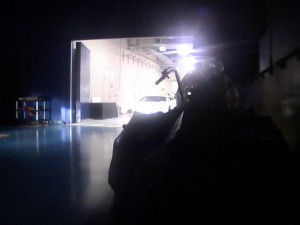 Above is the link to the Newspaper article and photos.

A busy four days has just passed. Tempest was used in the Clarkson Hammond and May live show. Upon first seeing a photo of The Black Rhino a few weeks back the production crew thought that Tempest would be great for the show, and so it turned out. I spent a lot of time backstage getting to know the production crew and stage hands alike. Everyone was very friendly and accommodating. My part was very small. Make sure the hovercraft goes when it is supposed to. Mr Clarkson does not like it when machines do not work properly. Tempest did get some stage fright during a rehearsal when I wasn’t around. Nothing major she was just frightened as she has never been started by anyone other than me. Yes I anthropomorphise with my machine. During the event Tempest was very well behaved and showed off nicely. Mr Clarkson was heard to say while it wasn’t the prettiest hovercraft he has seen, it is the best flying one he has been on, and the best steering. High praise indeed from a man in the know.
I put a lot of effort in to making her perform at a high level not so much on her looks. Making things pretty adds weight and weight is the enemy of Hovercraft. Tempest is a cruising hovercraft and can keep up with the bigger more powerful hovercraft in our WA Hovercraft club. She will take ferry waves in her stride, something small hovercraft usually cannot do well. Also she is very economical 17L of fuel for 74kms around Mandurah estuary. Tempest can be made into a very fast sports machine by shortening the skirts for a firmer lower ride. Also by tuning the fan to put out more thrust and less lift. A few less blades is an option for more thrust less lift. Personally I like to have lift as my priory as once that is good the hovercraft will thrust better on less HP. A 65hp Rotax engine is an easy option to really get her to boogie. Tempest would then be a weapon in the wrong hands.
See the rest of the blog for the build for start to finish. Everything is in there wins and losses. I believe in a warts and all approach. How else can hovercraft builders see what works and what doesn’t. I like to put it all out there and actively encourage builders of hovercraft to give it a crack.